The Course of History 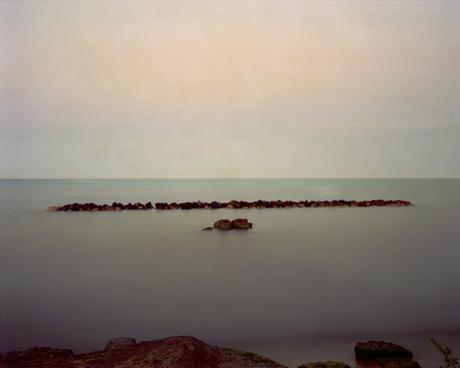 Bart Michiels:  The Course of History

Foley gallery is pleased to announce the New York debut of Belgian photographer Bart Michiels.  Family war stories passed down from a generation informed Michiels that the family farm was once taken over by German army and that a bomb dropped onto the barn, never detonating.

Michiels became interested in the effect wars have had on the land in Europe.  How particular geography is now endowed with an unwelcome history.  Michiels carefully chooses sites marked by great battles, historic losses in life and turning points for shaping destiny and our history.  He has traveled to Waterloo to record where Napoleon fell to the Duke Of Wellington and to Bastogne where the Battle of the Bulge called a million men to wage battle.

The photograph Verdun, 1916, Le Mort Homme, 2001 captures a portion of the now pastoral land where The Battle of Verdun was fought.  The hill of Le Mort Homme was the site of one of the fiercest battles of WWI where in the course of 10 months, 700,000 were dead, wounded or missing.  His photographs loom 60 x 72 inches to reflect the magnitude of these historic battles.

The Course of History refers to how these wars of the past defined the future of the world and how war has become an essential part of our history.  This is as true today in the War in Iraq as it was during the Battle of Waterloo.  But if the lessons are not learned in the course, we are doomed to repeat our mistakes again at the cost of so many lives.  This is the price we pay.

These contemporary photographs are landscapes of battlefields with disturbing quiet and inferred history.  New marks from farm machinery and strolling livestock replace, but refer to the marks of the fallen, the futile foxholes and bomb marked terrain.  Michiels is not interested in recording the evidence of a battle once fought.  In part, his photographs are reclamation and remembrance of the land with an ambition to make something good out of the scene that once held the fate of so many soldiers.

Bart Michiels (b. Diest, Belgium, 1964) received his degree at the St. Lukas Instituut voor Beeldende Kunsten in Brussels.  His work is held in the permanent collection of the Fotomuseum, Antwerp, Belgium, Le Musee’ de la Photographie, Charleroi, Belgium and the Museum of Fine Arts, Houston, TX.