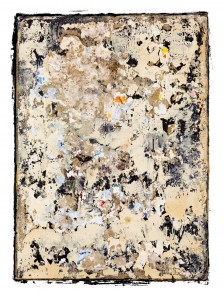 These accidental works of art, formed by the hands of unknown employees who repeatedly install and deinstall advertisement posters, are discovered by chance during daily subway commutes by the artists. They might only remain visible for days until the next advertisement is placed on top, never to be seen again in their photographed forms.  Subtext reveals a world of unintentional “non-made” street art that asks: What lies beneath that which forms desire?

Wyatt Gallery is known for his collaborative work with other artists.  Subtextwill include two such works with renowned contemporary artist Hank Willis Thomas.  Thomas is a conceptual artist working primarily with themes related to identity, history, and popular culture.

Wyatt's work has been exhibited worldwide and is in major public, private, and corporate collections such as the Museum of Fine Arts Houston, The George Eastman House, the Museum of the City of New York, New Orleans Museum of Art, American Express, and Comcast, amongst others.  His work has been featured in Esquire, the New York Times Magazine, Departures, Conde Nast Traveler, Mother Jones, Oprah's OWN TV, NBC, the LA Times, Fast Company, NY1 News, and more.

Wyatt received his BFA from New York University's Tisch School of the Arts in 1997.  He is a recipient of a Fulbright Fellowship to Trinidad, the PDN 30 and Rising Star, the Santa Fe Center Editor's Choice Award, and was featured in 25 Under 25 Up-and-Coming American Photographers by Duke University Center for Documentary Studies published by Powerhouse.

Subtext will remain on view through February 22nd.  Foley Gallery is open Wednesday - Sunday, 12 - 6pm. To request images; please contact the gallery at 212.244.9081 or info@foleygallery.com.