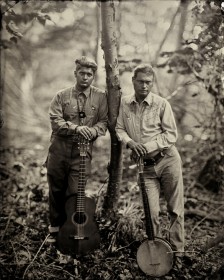 FOLEY gallery is delighted to present a series of photographs by tintype artist Lisa Elmaleh.

As urbanization continues to become more prevalent in America, history and growth of rural identity and culture become fleeting and near forgotten. Since 2010, Elmaleh has been creating tintypes of traditional folk musicians who live in and around the Appalachian Mountains. Her project grew out of a love of the land, American folk music, traditional American culture and her own romance with this 19th century photographic process.

Portraits captured by tintype call for great patience from both the sitter and the photographer. An entire day is spent with each musician - each 8x10 plate is hand coated, exposed in a large format camera, and developed on-site. The tradition of American folk music echoes in the historic nature of the tintype photographic process, connecting photographer with subject, each with their pursuit of keeping their own respective histories alive and well in the 21st Century.

These warm-toned portraits combined with a selection of their natural landscape counterparts, provides a full setting for understanding a way of life.  The crops are garlic and tobacco and the wardrobe is dungaree and flannel.  Hands are well worn, larger from labor and the rigorous playing on their instrument of choice.  Elmaleh’s approach is simple and straight forward which echoes the lifestyle and the plain dresses worn by her female subjects.

These are portraits in the tradition of August Sander and Nicholas Nixon with nods to the Appalachian portraits of Shelby Lee Adams.  Elmaleh’s exploration continues a response from photographers who look at and describe a culture defined by its values and beliefs.

Lisa Elmaleh lives and works in Brooklyn, NY.  She holds a BFA from the School of Visual Arts in NY.  Her photographs have been exhibited widely including a solo exhibition at Candela Books + Gallery in Richmond, VA. Group exhibitions include ArtCenter South Florida, Miami, FL; Ogden Museum of Southern Art, New Orleans, LA; Bronx Biennial Group Show, Bronx, NY.  Her work has been published in Harper’s and Black & White magazines.  She is a past recipient of the Tierney Fellowship.

American Folk will remain on view through August 9th.  FOLEY is open Wednesday – Saturday, 12 – 6pm.  To request images; please contact the gallery at 212.244.9081 or info@foleygallery.com.