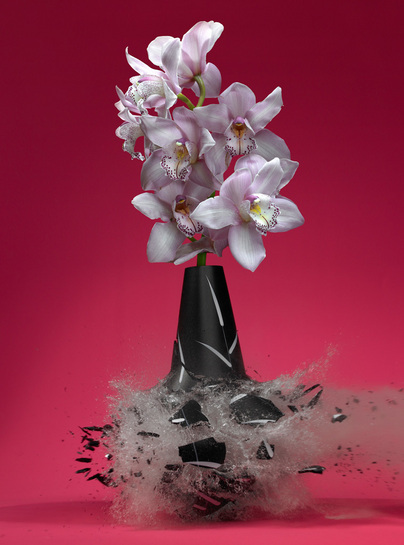 For his two forefathers the camera became the tool, which through trial, advancement and reinvention would define the exact and phenomenal natures of human, animal and mechanical motion. With Muybridge fitting his cameras with shutters to work at a speed of less than two-thousandths part of a second and Edgerton devising the repeatable short-duration electronic flash, microsecond imagery and imperceptible sight became utterly visible. The camera's eye could frame scenes that a human's could not, and thus became both the scientific and poetic device with which to arrest the moment of movement.

To produce his "Flowers" sequence, Klimas arranged classic, elegant still lifes of blossoming flowers placed in vases, nestled against vibrant monochrome backgrounds. The photographer then makes just one photograph, set off by the sound of impact as a spring-fired projectile bursts the vessel into a bedlam of fragmenting pieces. The resultant image is deemed successful only when the height of tension exists between poised, inert flower and its rupturing container.

As Muybridge and Dr. Edgerton before, Klimas grants our imperfect human eyes the ability to picture and contemplate a moment in rapid flux. We are fixed at this moment of explicit, explosive transformation in order to consider how the glass and ceramic upheaval below is an immediate and simultaneous account of its own and the unmoving flowers's transience. With each playful and sudden photograph, Klimas amplifies and accelerates only the natural course of all matter, to breathe as a moment of its past, in the bud of its present, and the grace of its fall.

Martin Klimas received his diploma of visual communication from the Fachhochschule Dusseldorf in 2000. His photography has recently appeared in "The New York Times Magazine" and has been exhibited in galleries, museums and fairs throughout Germany, abroad and in the United States including a solo exhibition at The Andy Warhol Museum in spring 2008. Martin Klimas currently lives and works in Dusseldorf, Germany.

The exhibition will remain on view until January 17, 2009. For more information or to request images, please contact the gallery at 212.244.9081 or via email at info@foleygallery.com.