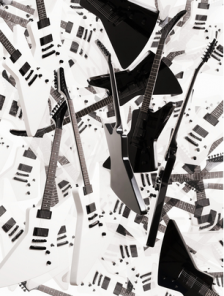 The title of the show, Extreme Learning Machine, draws inspiration from learning devices designed to replicate artificial learning techniques and biological learning mechanisms. Based on algorithms of human nervous systems, ELM has infinite learning capacity and captures the intuitive efficiency of brain learning.

Costa’s photographs physically mimic this digital and retouched reality by using in-camera techniques, cut paper, and studio constructions rather than the modern tools of Photoshop. The analog reconstruction as a proxy to the real world reflects a condition in which identity, space, and desire are fluid from one moment to the next. Compositions recreate a reality where the digitally constructed and altered image imposes itself on our notions of space, place, intimacy, and self. Costa uses masculine signifiers and standardized articles such as motorcycle helmets, cars, and soccer gloves and re-contextualizes them so that they shift seamlessly between a physical reality and fabricated illusions. Objects, symbols and logos of mass production and consumption become vehicles for transcendence, as they are rendered and abstracted to be simultaneously melancholic and sublime.

Costa’s practice is very much a processed-based labor. Works absorb, mimic and inevitably humanize the visual language made possible by machine and imaging software. Compositions attempt to recreate the texture of a reality that has widened and opened via our ever-present screens and devices. Temporal experience now unfolds in a state of constant flux, shifting between a physical reality, and the seduction and distraction of the more desirable illusions and versions constantly presented, fabricated and delivered through our screens.

Joseph Desler Costa lives and works in Brooklyn, NY and Florence, Italy. He holds degrees from the University of Colorado at Boulder (BA) as well as ICP Bard College (MFA). He has exhibited his photographs and films at venues including Baxter St. Camera Club of New York, Arsenale di Venezia, Newspace Center for Photography and Mana Contemporary. He has recently had solo exhibitions at the International Center of Photography and BDP Project Space (Jersey City). Costa’s work will also be featured in the upcoming 2015 Lianzhou Foto Festival this autumn in China.

Costa has published several artists books, including Dedications_Calibrations (Silent Face Projects, 2014) and Fruit and Buns (Self-Published, 2014). His work has featured on a number of blogs as well as in digital and print publications including The New York Times, Self Publish Be Happy, VICE, Der Grief, and Musée Magazine.