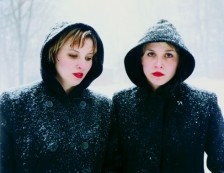 FOLEY is extremely pleased to present our first solo photography exhibition of Christa Parravani, entitled Kindred. Parravani's portraits of herself and identical twin sister, Cara play with the dichotomy of formal portraiture and emotional candidness. This haunting and surreal portrait series allowed Cara to regain a sense of lost power after a brutal sexual assault and for Christa, to complete her MFA thesis at Columbia University.Each photograph wrestles with her most intimate subject as well as the existential theme and experience being documented. Many inspired questions guide the selection and juxtaposition of these images. Clad in matching cloaks-a costume born out of necessity because Cara was too depressed to get out of her pajamas-Christa chose breathtaking backdrops to showcase their intimate relationship. Through images of herself and her sister standing hand-in-hand, kissing, or even positioned at different ends of the frame, Christa conveyed their intertwining souls and unbreakable bond. After Cara's untimely death from a drug overdose, Parrvani's photographs act as a meditation on the nature of identity and a means of catharsis- the account of being left, one half of a whole, and of her desperate, ultimately triumphant struggle for survival.

Kindred was never intended to eulogize my sister, but the bond between us that felt to me as if it were crumbling. At first after she'd died, I couldn't help but view the images as her last testament, and ours. Now I see that the meaning of the work exists somewhere between my young intent and the veracity of life.

Christa Parravani earned her MFA in Visual Art from Columbia University and an MFA in Creative Writing from Rutgers University. Her photographs have been exhibited internationally, and is represented by FOLEY in New York City and the Kopeikin Gallery in Los Angeles.

Kindred will remain on view through April 14. FOLEY is open Wednesday-Sunday, 12-6PM. For more information or to request images,     please contact the gallery at 212.244.9081 or via e-mail at info@foleygallery.com.