At Home With Themselves 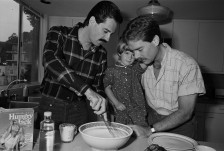 Foley Gallery is very pleased to present Sage Sohier’s, At Home With Themselves, a series of domestic portraits of same-sex couples in 1980s America.

Next month’s Supreme Court ruling on Obergefell v. Hodges will determine the constitutional right and legality of same-sex unions, forever changing our political and social landscape. 30 years prior, photographer Sage Sohier began her groundbreaking project as a look into the predominantly private, yet prevalent domestic relationships of gay and lesbian couples.

At Home With Themselves began in 1986 when the AIDS crisis was affecting countless lives across the country and same-sex relationships were still held as discreet. Sohier reflects, “I was interested in how as a culture, we weren’t used to looking at two men touching, and was struck by the visual novelty yet total ordinariness of these same-sex relationships.” Sohier was initially motivated by her father’s own discreet homosexual relationship and navigation of the gay community. It was her impassioned curiosity that led her to discover the world that her father was already beginning to explore.

In the 1980s, the project was so culturally edgy, it was impossible to find a publisher let alone a wide enough audience who would be willing to accept its truth. Nearly 30 years later, her work is especially poignant in the context of today’s world where the social acceptance of same-sex unions has changed. Sohier says, “Looking at these pictures now, I realize that it took a good deal more courage to stand up and be photographed as a same-sex couple in the 1980s than it does today, and I think the photographs somehow convey that. In some, there’s a tentativeness, in others a kind of not-to-be-taken-for-granted raw tenderness. People in my father’s generation had grown up feeling that being openly gay was just not an acceptable option. In my generation that began to change, and I was grateful to be witness to it”.

To request a press copy of At Home with Themselves, please contact the gallery.