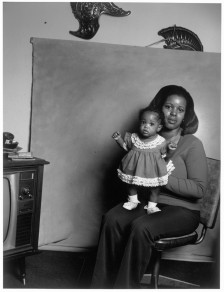 Borensztein first immigrated to the United States from Israel in the late 1970s and initially worked as a traveling portrait photographer throughout the environs of San Francisco.  Commercial portrait sessions would be set-up by eager salesmen, sending Borensztein across California, making up to 30 portraits a day of people in their homes.  While photographing put-on smiles in color for his employer, he decided to make his own photographs in black & white, pulling far enough away from the backdrop to reveal the interior room, the domestic life of his sitter(s).  With clear directions not to smile, “the masks on their faces vanished.”  Eventually, he traveled across the country, meeting his customers in public spaces, economically covering more subjects at a time.

During his travels, it became clear to him that the “American Dream” he longed for himself was also a dream that he shared with his subjects.  But, like his own life, the realities of these mostly working class families wore away at the possibility.  A loneliness and isolation emanated from his subjects.  As in the portraits of Arkansas’s Mike Disfamer and Germany’s August Sander before, Borensztein’s photographs reveal what his subjects really look like and not necessarily what they want to be.

Although his subjects didn’t know one another, they seem like they are a part of the same community, trying to present themselves in the “right” way.  They are on the same social level, having the same concerns, ambitions and sharing similar living conditions as one another.  Borensztein’s use of a simple and consistent backdrop equalizes their status.  But, by revealing their immediate surroundings, the opportunity to be seen as something other than they are vanishes. When the backdrop gets put a way and the photographer pulls into his next town, their lives go back to normal. By subtly shifting how much is portrayed, Borensztein reinterprets the construction of the American identity.

Leon Borensztein (b. 1947) earned his MFA from the San Francisco Art Institute in 1980. He was a recipient of a Guggenheim Fellowship in 1987 and a grant from the California Council of the Humanities in 2003. His work has been exhibited at Pier 24 Photography in San Francisco, the Centre Nationale de la Photographie in Paris, the Art Institute of Chicago, the Bibliotheque Nationale in Paris, and SFMOMA. His monograph, America Portraits, was published in 2011.

American Portraits will remain on view through July 26.  Foley Gallery is open Wednesday – Sunday, 12 – 6pm.  To request images, please contact the gallery at 212.244.9081 or info@foleygallery.com.