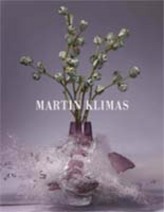 Essay by Matthias Harder from the German by Jeanne Haunschlid

The florist's bouquet is once again gaining in popularity as a token a guest offers his host, whether friend or relation. Very quickly a suitable vase is sought among the selection of colored or transparent, rotund or angular ones at hand. Suddenly the vase explodes. Is it a calculated shock or a plain and simple provocation when Martin Klimas blows our bourgeois conventions to pieces?
The main object in his pictures is an arrangement of lowers in a vase: tulips or carnations, orchids or amaryllis. These are placed squarely at the picture's center against a neutral, mostly monochrome background: no other detail distracts the attention of the viewer. It all reminds us of classical studio and product photography, something Klimas is very well acquainted with. Then with spring-powered firing device, the Dusseldorf photographer himself aims at the vase, which thus bursts into a thousand pieces. Klimas makes just one photo, set off by the noise the projectile makes on impact. In the next fraction of a second, the flowers - without the support of the vase - will be thrown sideways or tumble to the ground, but this is a sight the photographer spares us.

A photo directly before the shot, i.e., of the flower sill-life alone, would be photographically just as uninteresting as one that showed the aftermath of the final fragmentation, when flowers and vase shards have fallen to the ground. And within a sequence of the entire event - that is, inclusive of all the aesthetic, in-between stages - viewers would surely decide on the same shot that Klimas favors. However, the photographer does not choose from different variations of the nearly same situation, but accepts the single take as the final image only when the tension between the static and the dynamic is to him in sync. Chance, too, helps bring about the production of the photo.
Hardcover, 12.5 x 9.5 inches, 40 pages
Sold Out