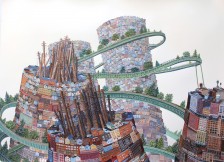 After any pendulum swing of chaos grinds to a slow halt, there will come a time when you will have to decide if you are going to wallow in the rubble or take what remains and create a new empire.

Building upon recent work, I have been in search of a solid ground. A bit less kinetic than past work, I have been trying to take what was left of the world in my paintings and create a stability of sorts, thinking about community ties and the security (or illusion of security) needed to nurture growth.  Cities are fascinating creatures that I am just beginning to scratch the surface of. The work and organization that goes into a city’s creation and evolution, the constant shifting and adaptations and the sometimes hidden history of these changes, and a city’s dependence on civilian cooperation are things I like to think about. Reflecting this interest, burgeoning cities have begun to fill in the voids in my paintings. As in life, with a sort of trial and error, some efforts work better in making the whole precarious heap hum. I am consistently fascinated by the resilience of life and our ability to keep going in the face of sometimes horrendous or ridiculous circumstances. My paintings celebrate this fascination and my love of the urban landscape.

2009    The American Scene, The Delaware Center for the Contemporary Arts, Wilmington, DE

There Goes the Neighborhood, The Museum of Contemporary Art, Cleveland, OH

Pleiades: A Journal of New Writing  vol.29.1, The University of Central Missouri, 2009, cover

Then We Saw the Flames , Daniel Hoyt, The University of Massachusetts Press, May 2009, cover

Pleiades: A Journal of New Writing Vol 28. 2 2008,The University of Central Missouri, cover

The Plain Dealer 5.10.08 "Imagination is Heavy on Reality"  Review by Steven Litt

Artefakt Oct/Nov 05, "The World As We Know It" Review by Douglas Max Utter