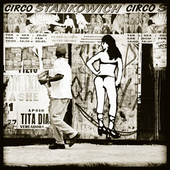 Alexandre Orion wants his graffiti to remain simple and understandable. He comes from the Brazilian tradition of pichacao (from piche, meaning tar) with its simple, bold and black line lettering. Traditional pichacao is a kind of shout for visibility, with no ambitions of being art. It is an attempt to protest against the way Brazilians live as a third world culture, but is often seen as too agressive and illegible. Orion is part of a new generation of graffiti artists who expand upon this notion and search for greater artistic meaning while still reflecting on cultural disparity in the metropolis.

Orion strategically creates these graffiti paintings and then hides himself, waiting to photograph the precise moment when an unknowing subject meets his image. His contemporary means of urban intervention turns the day-to-day life of passers-by into moments of unsuspecting joy, anguish, elation and danger. The photograph is the record of the event. His graffiti acts as a backdrop for a much larger conceptual ploy, which translates into a photograph as its resonant document.
Paperback, 12 x 12 inches, 77 pages $55.00 Signed